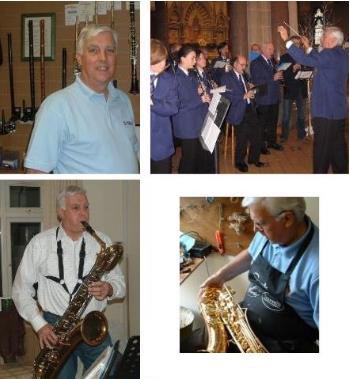 Born in Slaithwaite, a small Yorkshire woollen mill village, in 1947, Mike embarked on his musical career at the age of nine when he first learned the violin at primary school. He later played viola at secondary school, Huddersfield Youth Orchestra and the West Yorkshire Youth Orchestra.

Following in the footsteps of both his grandfather and father Mike decided on the military life and served as a bandsman for twelve years, playing clarinet and saxophone around many European countries and spending some time also in Saudi Arabia.

Following this, Mike began studying music at Newark College in Nottingham, where he spent much time specialising in the maintenance and repair of woodwind, brass and string instruments. During this time he kept up his performing skills playing in the college wind ensemble and a local swing band.

Within a week of moving to Omagh in 1980 Mike, at the request of the then conductor, Brian Turbitt, joined St Eugene’s Band, playing clarinet and saxophone. He quickly made many new friends in the band and also in other Omagh groups and has always recognised that his music has led to a very full and active social life.

On the retirement of Brian Turbitt, Mike took over as conductor of the 135 year old band and, with a few breaks, has remained in the position since then. Mike has said that he is happy to play any role within the band and believes in the importance of teamwork in music-making.

Mike, with his wife, Colette (nee McCaul) and son, Jonathan, started Reynolds Music in Castle Street in Omagh. A well-stocked store, it is a favourite with musicians of all interests and ability in the area.

Clearly, a man who loves his music!